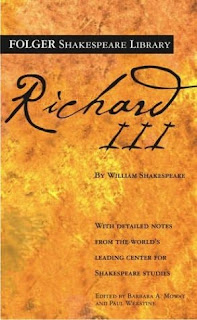 “Now is the winter of our discontent
Made glorious summer by this sun of York;
And all the clouds that lour'd upon our house
In the deep bosom of the ocean buried.”

I've always kind of ignored Shakespeare's history plays. Even though I love history and the eras Shakespeare writes about, I shy away from the plays. In a way, I feel like I don't know enough to "get" them.

But when I stop thinking of the history aspect and start focusing on the characters and action...I fall in love.

This play, Richard III, will probably remain a favorite of mine. I wasn't sure what to expect going in, since I had never read it before, but I was intrigued by the darkness. It also opened with the above quote. I was intrigued from the beginning (especially after having read The Winter of Our Discontent by Steinbeck last year-cool to see where the title came from).

Considering I had no idea what was going to happen, I was surprised by the amount of blood, murder, and deception in the play.

“And thus I clothe my naked villany
With odd old ends stolen out of holy writ;
And seem a saint, when most I play the devil.”
I was truly impressed by the amount of evil one character possessed. He slowly begins "taking out" those who are next in line, as well as marrying whoever he thinks will help him win the throne.

This is a bloody, bloody play. I lost count of how many people dear Richard offed. It seemed that as soon as someone seemed slightly uncomfortable with his thoughts and plans, they were next on the "hit" list if you know what I mean.

I love that Shakespeare played up his villainy throughout the play with well-crafted lines to show the audience how sick and twisted dear Richard was...

“Why, I can smile and murder whiles I smile,
And cry 'content' to that which grieves my heart,
And wet my cheeks with artificial tears,
And frame my face for all occasions."

What a sneaky little man.

I also love that this play didn't feel like history to me. Instead, it truly read as one of Shakespeare's tragedies (I think it is often referred to as The Tragedy of Richard III). The one main fault I had with the other history play I've read so far, Antony and Cleopatra, is that the action was very spread out to take in the scope of the historical events. In Richard III, I didn't feel that gap and the play flew by (I read it in one sitting). I was impressed with the way Shakespeare condensed and molded the events into 5 acts. There was plenty of action to keep the play steadily progressing forward, and I find myself not being able to find fault in it.

By the end, since I didn't know what was going to happen, I was pleased to see I was rooting for the right people. :) And I also loved this line, said in the very end by dear Richard as things seems to unravel before him...

And, as silly as that line sounds, I think it really speaks a lot to who Richard was. He would stop at nothing and would let nothing get in the way of his becoming king. To let a silly thing, like not having a horse, stand in his way must have been irritating and frustrating. It really speaks to his ambition and drive.

And now, having finished this one, I am curious to see if any of Shakespeare's other historical plays can live up to this one. It blew me away-this is definitely one to make a priority!
Posted by Allie at 8:00 AM