The Fault in Our Stars by John Green. 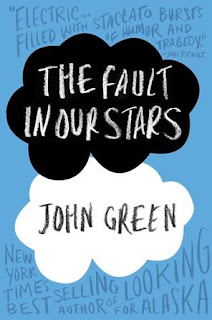 “Sometimes, you read a book and it fills you with this weird evangelical zeal, and you become convinced that the shattered world will never be put back together unless and until all living humans read the book.”

I wasn't sure if I was going to write about this book because I don't write that much about YA. And, I am sure that some of you are scratching your heads a bit to see me posting about a new release in the midst of Shakespeare Reading Month.

But the simple fact is: I really love Young Adult Fiction. It wasn't always that way. When I was a high schooler, there wasn't a lot to pick from in the YA section. There was a lot of fluff and only a few books of substance. That has gone through a significant change. I rediscovered YA in college, and in particular, when I took a YA literature course. That course taught me a lot about literature (maybe even more than my serious classes), but the one thing that sticks out was my professor telling us,

"Young Adult fiction is slowly becoming the most important literature coming out today. It is the only division of literature that allows for and welcomes significant change. All of the exciting literature is coming from there."

And I have to agree. While I can certainly name popular "adult" books, I can think of far more young adult books to hit the scene with more power and gusto. Twilight. Harry Potter. The Hunger Games. Percy Jackson. And the list goes on.

John Green is one of the YA authors that I have the most respect for because his books uphold a very high standard. All of his novels are realistic, passionate, and well-written. When I open one of his books, I know that I will find a lot to love. Unfortunately, I couldn't buy this when it came out, and I was a bit heartbroken I was going to have to wait to read it.

My mother saw my sad facebook status the day the book came out and went to purchase the book for me (thanks mom!). I brought it down to Florida with me, and I started it at 11pm one night. I ended up going to bed just before 2:30 that morning, after reading the book straight through.

Green has not disappointed me and has confirmed what I have come to strongly believe-that Young Adult fiction is important and should be valued higher than it is. When a writer can create something this powerful and wonderful, the naysayers of YA fiction need to check themselves.

For those who don't know, The Fault in Our Stars is about Hazel, a 16-year-old teenager battling terminal cancer. She is currently okay, thanks to a miracle drug that is giving her more time. She isn't in school, but instead finished high school at home and takes community college courses. She has to lug an oxygen tank around with her wherever she goes, and wheezes without it. There is a scene where a young girl asks about the tubes in her nose, and Hazel has to explain it. I cannot imagine that kind of existence.  Life has dealt her a crappy hand, but she seems to be surviving, pushing through, and accepting the way things are.

She meets Augustus Waters at a group session for teens with cancer. The two immediately become fast friends and where Hazel has clear evidence of her disease, it seems as if Augustus is fine.

But remember, this is a book about kids with cancer, and Green points out clearly in the beginning that both teens are really living on borrowed time.

Now, I read a lot of Lurlene McDaniel books as a young pre-teen. Those books were full of kids battling cancer, falling in love, and struggling with parents. And while I drank them all up with longing and the idea that love could conquer everything, like cancer, they did not have the impact that Green's novel had. Perhaps I was so deeply moved by Green's novel because of the family members in my life who have fought cancer since my bout with the tragic love stories in McDaniel's books. I lost my paternal grandfather immediately after my high school graduation because of a battle with cancer. I lost my paternal grandmother a few years ago the Monday before Thanksgiving to a battle with cancer. I was holding her hand when she passed away. Matt's mother battled breast cancer last year and is in remission, and his step-dad is currently undergoing chemo treatments for lymphoma.

Let me tell you, cancer is not beautiful or lovely. It is rough and frustrating and nothing like those Lurlene McDaniel books I read when I was younger. Cancer isn't fair. It attacks not only the person with the disease, but those around them. I remember driving my grandmother to treatments and listening to her talk in the car about how she hated it. How much she hated that she knew she had limited time left. She could do nothing about it and neither could I.

But Green tackles that head on. He doesn't gloss over cancer-no, that is part of his main focus. Hazel mentions at one point in the book that she is a grenade-ready to explode at any point to hurt those around her. She cannot control when or where. It is that kind of statement that makes Green's novel so powerful. He doesn't dumb down the pain or the impact of what the disease does. I commend him for that.

The biggest thing I found to love in the novel was Augustus' obsession with leaving a legacy. I think we all feel this a bit, and maybe more so when you know you are living on borrowed time. I found that I could relate to Augustus. He felt that as a teen, he had so much left to live and would be leaving nothing behind. I could understand that feeling, and I think it is a feeling that rings true for so many of us. We want to be remembered not just by those we intimately knew, but by everyone. I know that when I lost my grandparents I felt a bit of anger that so many people didn't know how wonderful they were. I wanted to scream it out, but couldn't.

Augustus only wants to be known for something other than being a kid with cancer. That is what drives him, what frustrates him, and what he discusses with Hazel-that the cancer cannot define who they are. They must strive to battle the cancer and live a life for themselves-one not ruled by treatments, drugs, and scary results. The must live for an infinite amount of time and build something for themselves and their families.

“Some infinities are bigger than other infinities.”

When I finished reading the novel, I was alone in the very dark hours of early morning. I read the last portion of the novel with a lump in my throat and tears burning in my eyes because it is that type of book. It was real and powerful and everything I expected from Green and more. The teenagers felt like teenagers. Of course they were far cleverer than I ever was at that age, but I knew people like them. I could relate to their very real struggles, and of course, the love they felt for one another.

It was a beautiful, beautiful book. It made me think long and hard about the purpose of life, my own legacy, and how much I love reading beautiful books with meaning.

This is one you shouldn't miss.
Posted by Allie at 4:00 PM

Email ThisBlogThis!Share to TwitterShare to FacebookShare to Pinterest
Labels: Favorite Passages, John Green, The Fault in Our Stars, YA