Book 127: As You Like It by William Shakespeare (Shakespeare Reading Month). 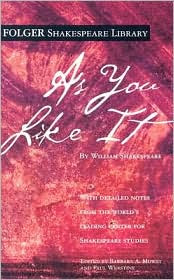 “The fool doth think he is wise, but the wise man knows himself to be a fool.”

It wasn't until I sat down to read As You Like It that I remembered I read it in college. That concerned me for a moment, since I was having a hard time remembering it, but once I got into it, all of the play came back. And I remembered that I LOVED this play when we read it in class.

As You Like It is the story of a young woman, Rosalind, who is banished from her Uncle's court and finds her way to the Forest of Arden to wait for acceptance. Her cousin Celia and the court fool Touchstone join her in the forest as they wait to go back.

One of the things that stands out about this play is the complexity in addressing identity. At one point in the play, Rosalind is impersonating a man impersonating herself. :) It is a great play on what happened with the issue of actors back in Shakespeare's time. Since, as you probably know, women weren't allowed onstage, the role was originally played by a young boy playing a female impersonating a man who was pretending to be a woman. Follow all that?

But in addition to all of that, the play is also a great comedy. It has all the elements of Shakespeare's comedies that I absolutely love: romance, confusion, fools, and a grand reveal. Of course it ends happily as well, which is always a great aspect of a comedy. The banter and relationships between the characters is fun and inviting. The play is also a fast read and one of Shakespeare's shorter works.

There are also some great lines in the play, including the bit that is on my graphic for Shakespeare Reading Month:


"Blow, blow, thou winter wind!
Thou art not so unkind
As man's ingratitude." 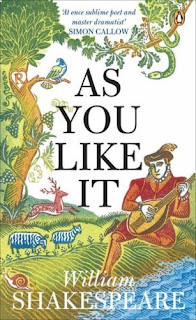 The play also contains one of my favorite Shakespearean speeches (the Queen Mab speech in Romeo and Juliet is another). I'm sure you'll recognize this:

"All the world's a stage,
And all the men and women merely players.
They have their exits and their entrances;
And one man in his time plays many parts,
His acts being seven ages. At first the infant,
Mewling and puking in the nurse's arms.
And then the whining school-boy, with his satchel
And shining morning face, creeping like snail
Unwillingly to school. And then the lover,
Sighing like furnace, with a woful ballad
Made to his mistress' eyebrow. Then a soldier,
Full of strange oaths and bearded like the pard;
Jealous in honour, sudden and quick in quarrel,
Seeking the bubble reputation
Even in the cannon's mouth. And then the justice,
In fair round belly with good capon lined,
With eyes severe and beard of formal cut,
Full of wise saws and modern instances;
And so he plays his part. The sixth age shifts
Into the lean and slippered pantaloon,
With spectacles on nose and pouch on side;
His youthful hose, well saved, a world too wide
For his shrunk shank; and his big manly voice,
Turning again toward childish treble, pipes
And whistles in his sound. Last scene of all,
That ends this strange eventful history,
Is second childishness and mere oblivion,
Sans teeth, sans eyes, sans taste, sans everything."

So beautiful. I love that Shakespeare created this and now, centuries later, we can still have the chance to read and remember these beautiful passages.

If you haven't read this one yet, I highly recommend it. It is a happy, loving, and funny comedy that I know you'll enjoy-especially those of you who are just discovering Shakespeare.

Email ThisBlogThis!Share to TwitterShare to FacebookShare to Pinterest
Labels: As You Like It, Favorite Passages, Finished, Shakespeare Reading Month, William Shakespeare