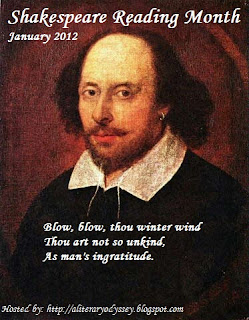 I hope everyone is having a blast with their chosen Shakespeare plays! I know that I am chugging along and will finally get some thoughts on the plays I am reading up by the end of next week (I'm trying to work through my backlog of posts on a James novel and the Wharton I finished).

In any case, I'm trying to keep the enthusiasm up and the random information on Shakespeare rolling. In case you missed it, here are the two other informational posts I have made about the Bard earlier this week:

Feel free to go and read!

For today's post, I thought it would be fun to share some of the fun and random facts known...and unknown about Will Shakespeare. Some of these might sound familiar, but I hope at least a fact or two are new to you!

*I should note that even some of these, while recognized as being accepted among scholars, aren't verified by everyone. A lot isn't known about Shakespeare, so that leaves some things open to questions. I did my best to include only the things that are noncontroversial*

Anyone else know anything interesting about the bard? :)
Posted by Allie at 8:00 AM