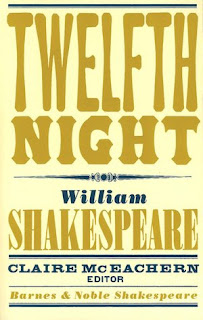 “Be not afraid of greatness. Some are born great, some achieve greatness, and others have greatness thrust upon them."

In Twelfth Night, Viola is shipwrecked in a new land. She assumes her twin brother, Sebastian, drowned at sea, so she determines that the best way to keep her identity safe for a period of time is to dress as a man and find work. She ends up under the employment of Duke Orsino, and he soon finds a lot to value in his new servant. The Duke doesn't know that Cesario is really Viola, but it all comes out eventually...

The Duke bids Cesario to woo the lovely Olivia, and this is where the plot gets a little convoluted. Olivia ends up falling in love with Cesario (Viola) and not the Duke. Olivia also has some lovely drunk relatives who have plans for her married future, so of course, all of the characters end up swapping partners, falling in love, and being generally confused.

This was a marvelous play! I was cracking up in any of the scenes featuring Sir Toby Belch (Olivia's uncle) and Sir Andrew Aguecheek (his friend). Both characters spend quite a bit of the play intoxicated, and offer quite a bit of amusement and chaos to the proceedings. Their conversations and mixed-up words are some of the funniest bits of the play! 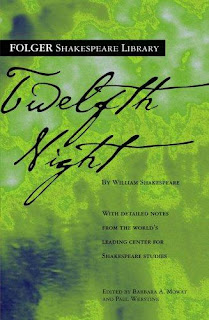 Another portion that I really enjoyed is when Viola's actual brother, Sebastian, shows up in town with his servant Antonio. As Sebastian and Viola, stilled dressed in her disguise as Cesario, interact with the other characters, there is a great deal of confusion and mix-ups with the relationships. I liked that we, as the audience, get to know Sebastian in the end. Sometimes Shakespeare throws in characters at the end without defining them, but this is not the case with Sebastian.

In the end, everything manages to work out. The characters pair off as they should and the sneaky villains are punished. It was just what I expected from a Shakespearean comedy, and it is definitely a play I will revisit again. I loved the female characters, and I'll admit that I fell in love with both of them. Both were witty and clever-pushing the boundaries of acceptability for females in their time.

I find that I am constantly surprised by the power and wit of Shakespeare's female characters, and that has been especially true in this and As You Like It. I wonder, did Shakespeare do the gender switching because it was actually males reading the parts? Or did he really love and push for women to take on that level of strength and wit in their everyday lives? I wonder...

Anyway, fabulous play, and definitely one that I will read again and again! I hope you'll also give it a chance.

“This fellow is wise enough to play the fool;
And to do that well craves a kind of wit:
He must observe their mood on whom he jests,
The quality of persons, and the time,
And, like the haggard, check at every feather
That comes before his eye. This is a practise
As full of labour as a wise man's art
For folly that he wisely shows is fit;
But wise men, folly-fall'n, quite taint their wit.”
Posted by Allie at 8:00 AM