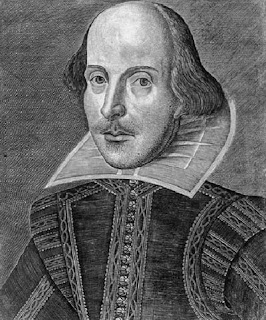 Today is the first of January, which means it is the first day for Shakespeare Reading Month! In addition to my own posts on the plays I am reading, I also have a couple of other posts to give participants information, trivia, and helpful tips about diving into Shakespeare.

I thought the best place to start would be a discussion on how to read Shakespeare. Shakespeare, as my college Shakespeare professor would say, is not meant to be read. His works are plays, and were performed in front of live, and often testy, audiences. So how can we hope to simply read his plays and understand them?

It is definitely a tricky thing to navigate! As a reader, we already know to give individual voices to characters in our heads. When we read regular novels, the author knows to give us description in the narration as well as the dialogue tags. When reading Shakespeare, a reader doesn't have that liberty. Instead, the reader has to infer everything from what the characters say and what others say about them. We don't get to see them in action. And while there may be cues after a piece of dialogue, such as, "he dies," that doesn't tell us how the character dies. Does he simply fall over? Does he flop around like a fish? Does he take five minutes to finally succumb to whatever killed him?

This is where reading Shakespeare can be a blast. Because the READER gets to fill in all those glorious details. We can add our own interpretation into the play, since we aren't seeing it being interpreted for us by the actors and director.

I think we all need to keep that in mind as we begin reading plays this month! These were never read on a regular basis, but performed. As readers, we have to work a little more to get the same sense of setting, place, voice, and drama that we get from reading novels.

In addition to all of that discussion, I have also thought a lot about what I have been told about reading Shakespeare from being a student in a college Shakespeare class, to reading "Romeo and Juliet" with my ninth graders as a student teacher. Because on top of the lack of narration and straight-forward description, a reader also has to tackle the language. I've put together a list of things that have worked for me or my students in the past. I hope that they help you as you begin to dive into the Bard's work. :)

(And if you think of another tip, leave it in the comments and I'll add it to this list!)

I hope these tips and hints will help you as you read. These are all things I have done, or have told my students to do in the past. I LOVE reading Shakespeare and diving into his language-I hope you do too!
Posted by Allie at 8:54 AM