Book 122: Motivation and Women as Pawns. 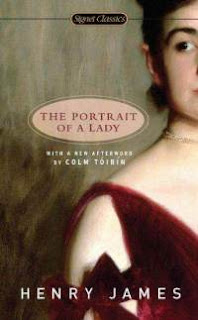 There is something incredibly comforting about sinking into a novel by an author you are beginning to love. Some aspects of the writing are still new and exciting, but the common themes and threads just suck you as the reader right in to the story.

Novels like this one become immediate favorites. I like novels dealing with societal issues-standards of acceptability for individuals-and how a character chooses to conform or fight. This is something I think James does very well, and as I am reading, I find things reminiscent of Edith Wharton. She is also known for her commentary on society and it's pressures. I suppose it shouldn't have surprised me to know that James and Wharton were friends in his later years-perhaps he influenced her?

In any case, I love the kinds of internal character struggles I find in The Portrait of a Lady. For those unfamiliar, the novel begins in England with a young woman, Isabel Archer, being brought over by her eccentric aunt to go on a tour of Europe. Without parents or fortune, Isabel is grateful that her aunt has taken her in and is will to care for her-show her the ropes of Europe.

In the first 100 pages, James gives us a clear portrait of who Isabel is. She is a strong young woman, with ideas of traveling, discovering, and learning from the world around her. She is beautiful, yes, generous, and faithful to the people who show her kindness. I also find that she doesn't necessarily want what society wants for her.

For women without strong families, without money, their main goal in this time period was to marry well. By marrying well, they could hope to do better than continuing to mooch off of willing friends and family. But Isabel seems to want to go against that, and I hope that the rest of James' novel will show me that (although, I have a feeling it won't).

So while Isabel is with her family, she charms her uncle and sickly cousin, so that when her uncle is on his deathbed, he is easily persuaded by her male cousin to leave a large fortune to Isabel. This will allow her to travel, to live, and to do the things she so desires. It is the perfect gift for a woman with clear intentions and goals other than making some stuffy old man a beautiful wife.

Enter Mrs. Merle. An eccentric friend of the aunt, Mrs. Merle comes in to tidy things up. she is enthralled by Isabel and determines that she must be married well. They decide to travel together on the continent..and I know where this is headed.

Why did all women have to be pawns in this age? A woman was never valued for her brain, or told to guard her independence. No, women were married off to help their families gain fortune, status, or worse. There was never acceptance of a woman's right to choose...unless they were independently wealthy, which Isabel now is...

And I know that as I read further, that parts of the novel will make me angry. Because as much as I want to see Isabel succeed as a strong, independently wealthy young woman, I KNOW she is going to wind up miserable and alone-trapped in a marriage she doesn't want. And while I know all that, I am still going to be completely obsessed with this novel until I finish it. James is simply that good of a writer.

I could also be wrong, but I have a very strong feeling I'm not. ;)

I guess I'll have to continue reading to see what fate has in store for Isabel, but one thing I do know for certain is that this is going to be end up a phenomenal book and probably one of my favorites.
Posted by Allie at 9:00 AM

Email ThisBlogThis!Share to TwitterShare to FacebookShare to Pinterest
Labels: Henry James, The Portrait of a Lady